Cooperative Federalism and the Uncertain Political Environment: What Does This Mean for Your Facility’s Regulatory Compliance Requirements?

Cooperative Federalism. The idea encourages national, state, and local governments to interact cooperatively and collectively to solve common problems, rather than make policies separately. Since its establishment in 1970, the purpose of the U.S. Environmental Protective Agency (USEPA) has been to provide effective enforcement responsibility for federal environmental regulations—a more autonomous approach than Cooperative Federalism would offer and the umbrella under which state and local governments would operate. In the Trump era, downsizing of the USEPA’s budget and staff has forced states to rethink their positions on environmental protection.

According to the EHS Daily Advisor, the USEPA released its environmental enforcement results for 2017 in February 2018. The Trump USEPA initiated half as many enforcement cases and assessment penalties than in the first year of each of the previous three administrations. Despite this decrease in oversight activity at the federal level, current trends in regulatory compliance suggest that federal environmental regulations are not going anywhere. Modern political environments have caused decreases in regulatory enforcement pressure from the USEPA; however, state, local, and community groups have increased their focus on achieving environmental compliance, especially in the commercial sector. The current USEPA aspires to embrace cooperative federalism and give states more of an equal role in enforcement.

Several discussions about cooperative federalism have been ongoing since the current administration took office in January 2017. How is this going to affect enforcement of environmental laws and regulations? What does this type of policy making mean for businesses? The January/February 2018 issue of the Environmental Forum attempts to answer these questions. Stan Meiburg, Director of Graduate Studies in Sustainability at Wake Forest University, notes that an effective environmental system has “two strong partners working effectively to produce environmental results.” Bob Martineau, Commissioner of the Tennessee Department of Environment and Conservation, goes further by saying that “cooperative federalism is really about the how, not the what. As to the what, people will agree we should breathe clean air and should have access to clean water.”

Overall, for the collaborative concept between federal, state, and local entities to work, the public needs to be involved in the discussion and their input should be considered during policy making. State and local governments are the best people to gauge what issues their communities are facing. The underlying issue plaguing these discussions is that if the federal oversight from the USEPA is not there, the states and local communities may lose momentum due to a lack of resources.

The Environmental Council of States (ECOS), a national nonprofit and nonpartisan association of state and territorial environmental agency leaders, is one such resource that is available to states. ECOS was established in 1993 to improve the capability of state environmental agencies and their leaders to protect and improve human health and the environment in the United States.

In June 2017, ECOS developed a document to stimulate and advance a national conversation about cooperative federalism (Cooperative Federalism 2.0, Achieving and Maintaining a Clean Environment and Protecting Public Health, ECOS, June 2017). Todd Parfitt, director of the Wyoming Department of Environmental Quality and current ECOS president, reported that “states have the firsthand knowledge of how to achieve successful implementation, including how to work with involved parties and the public.” As part of the effort to maintain oversight momentum at the state level and increase public engagement, ECOS is inspiring state programs to implement continuous improvement actions to address new environmental challenges and to modernize and streamline their decision-making processes.

As one such example of continuous improvement action, ECOS has developed an interactive web tool to publicly communicate the progress each state has made in human health and environmental protection. ECOS Results is a voluntary project where states use existing routinely collected and reported data to tell their own story about public health and the environment.

John Lync Stine, Commissioner of the Minnesota Pollution Control Agency and former ECOS president, describes the motivation behind the project: “states are better when the public is engaged in this work and when we can explain how our agency activities, programs, regulations, and services protect their health and deliver the clean and healthy environment they desire.” Each state is able to track and report data in four fundamental areas: air healthy to breathe, healthy and thriving communities, less and properly managed waste, and water clean and available for all uses. This phased project is expected to have all states participating by their Fall Meeting in August 2018.

What does this all mean for business and who is enforcing the regulations in my area?

Increased state involvement in developing policies for public health and environmental protection will not affect the environmental requirements first put in place by the federal USEPA—just who is enforcing them. Facilities will still be required to meet state (and federal in some cases) regulatory compliance requirements for important areas such as air emissions, water discharges, waste generation, chemical management, and the regulation of tanks.

Under the umbrella of federal USEPA oversight, state governments have been implementing compliance programs delegated to them since the 1970s; therefore, the added responsibility from the political shift toward cooperative federalism is not new territory for them. This early in the shift, the levels of enforcement will vary from state to state as they adapt to the new system. What’s more, state governments have become increasingly important in advocating and implementing stronger human health and environmental protection programs. To businesses, this means that you not only are still required to meet past environmental requirements, but increased scrutiny at the state level could mean your requirements have potentially increased. Now is the time to gain visibility on your regulatory responsibility. 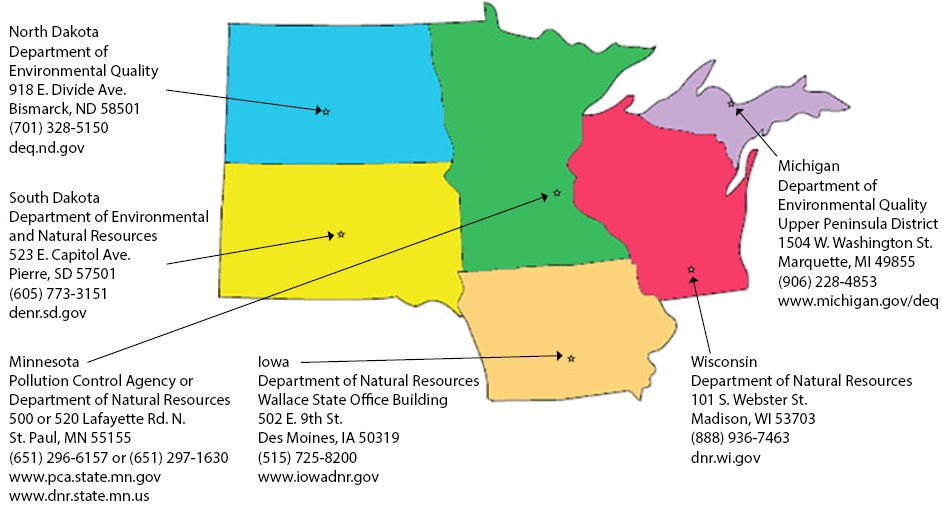 This map contains a list of enforcement authorities and contact information for the Great Lakes Region and Upper Midwest states (Minnesota, North Dakota, South Dakota, Iowa, Wisconsin, and the Upper Peninsula of Michigan).